REQUEST A CALL OR CONSULTATION

Tonia du Preez was a 19-year-old single mum when she decided to become a truck driver. Today, she’s executive manager at Xtreme Freight – a global transport, logistics and warehousing company with a fleet of vehicles across three locations. Tonia loves the flexibility and diversity of her job, as well as the fact that she gets surprised on a daily basis, even after 10 years at the same company. 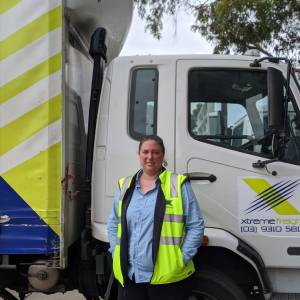 What does a normal day look like for you?

I manage the guys that we’ve got in our accounts team, our operations team, our special vehicles team and our sales team. We’ve got our warehouse as well. I just keep an eye on everyone and make sure they’re doing what they’re supposed to be doing.

How did you get to this point in your career?

When I was 19, I was a manager at KFC. After I came back from maternity leave, I found the job was too hard with two kids. Some days I’d be home at midnight. So I was looking for a new job and all the ads in the newspaper were saying “owner/drivers wanted”. I called one ad and they explained what kind of truck they were looking for, what size they wanted. I went to a used truck yard in Geelong, found the truck they wanted, bought it the next day and started work the day after that!

Had you ever driven a big vehicle like this before?

Definitely not. Backing up took some work, learning how to do that. I was driving a Pantech with solid sides, so that was my biggest issue at the start because you can’t see, so you’ve got to really rely on your mirrors. It’s not like driving a car where you can look behind you. There were definitely blind spots, so that took some getting used to.

It didn’t take long to learn how long and how wide my truck was, but driving around inner suburbs like Box Hill with narrow roads was a bit painful at the start. If I was driving on a freeway or around Dandenong where they’re used to trucks, it wasn’t so bad. When I first started driving trucks, it was for a family-owned business and I was in good company because one of their operators was female and there were already a couple of female truck drivers on board. They knew I had kids, so I could pick my hours and they just worked around it. When I came to Xtreme Freight, it was the same scenario. It’s a family business, so they understand my family situation.

Have you had a particularly memorable truck journey?

When I started at Xtreme Freight, it was in an office position, but they’d also send me out in the van if they didn’t have a driver in the area. Once I had to drive two pallets to Queensland. Myself and another driver piled into the van with a heap of pasta and drove overnight to Queensland and back.

What’s been your career highlight so far?

I was runner-up for the Supply Chain & Logistics Association of Australia Young Achievers Award. We got flown to Luna Park in Sydney for the awards night. It was recognising people under the age of 27 who were up and coming in the industry. I was doing accounts at the time and now I’m executive manager. So I’ve come a long way in 10 years. It’s nice to see that the effort you put in when you start off being a driver, and then you’re in a warehouse, then you’re doing data entry and start moving up in the ranks. It’s good to see the progression.

What do you love about your job?

It’s the flexibility. If I wanted to be home by 3pm to pick the kids up from school, it was up to me to learn my run and make sure I knew where I was going so I could do it efficiently. And the ability to go, “oh the kid’s sick, they can come out in the truck with me for the day”. Even here in the office, if I need to bring the kids in, they come in. Most workplaces, if I was in an office block in the city and I needed to bring my kids in, that’s not happening.

After being in the industry for so long, are there any surprises?

I get surprised every day. We deal a lot with air freight and sea freight coming in, so we see some strange things enter the country. We’ve had to deliver a big elephant statue to Toorak, we’ve had to deliver an antique bell from a church in Italy to a house and we had to take a crane inside. I never know what’s going to come across my desk.

Has this industry taught you anything about yourself?

I’m stronger than I look. Some people might look at you and think “you’re a woman, you don’t know”. You deal with some dinosaurs sometimes who tell you “I’ve been around for 25 years” but I’ve learnt that when I put my foot down, eventually they’ll listen. It’s good to know that I’ve got that strength.

The CEO of Xtreme Freight is also a woman. What’s she like as a boss?

Amanda O’Brien is a great boss. I’ve been here for a long time, I’ve had two kids since I’ve been here and she makes it so I can work from home if I need to. Even now, the kids come in on school holidays, I make them do “PODs” [proof of delivery] and clean the office. Little jobs to keep them busy.

Are there many other women at Xtreme Freight?

There are four of us out of an office of 25 or so. The good thing about Xtreme Freight is that the work is diversified. Females within this business aren’t segregated to the office doing clerical work or accounts. We have people in the trucks, we have people in the office, doing operations, doing accounts. We give people the opportunity to move within the business, so if you come in as a warehouse hand, you’re not deadlocked into that role. You have the chance to upskill. For example, I got my forklift licence here. When all the other guys in the office were getting their forklift licence, Amanda said, “why don’t you jump in”. I didn’t want to, I didn’t need to because I was in accounts at the time. But now I have that skill which will be an asset to me for the rest of my career.

How important is it for women to act as champions for other women, like Amanda?

Do you think there are any barriers that might discourage women from working in an industry like this?

They might come across one of the dinosaurs, an old-school road dog who’s been in the job for 25 years. They’ve rubbed him up the wrong way and he’s reacted badly and they’ve just assumed everyone’s like that. But they’re not. It’s a big industry and nine times out of ten you won’t get a reaction like that.

What advice would you give for a woman who might be considering a job in freight?

Do it. Jump in with both feet and learn to swim. I did. I was 19 years old, had two kids, was a single mum and I went out and invested in a truck for a job that I knew nothing about. Sure, there were things I had to learn, and I had to learn them on the job, but that’s the same as any new job. The good thing about freight is that there’s no real end in sight, there’s always going to be a role in transport in Australia. And it’s a really diverse industry. For example at Xtreme Freight, we worked with the government to develop an app for our drivers to help keep them safe on the job. So you don’t have to be a driver or do office work to get a job in this industry. There’s a whole range of options.

This article has been republished from https://transport.vic.gov.au/, see the original here

About the Author: Amanda Obrien